In the framework of the INTERFACES network, the former Athens Stock Exchange turns into a stage to host site specific controversial concerts and performances as part of the Tectonics Athens 2019.

“OUT OF THE DARK” (NEW SITE-SPECIFIC WORK): LEMUR (NO)
The world premiere of a site-specific work created for the former ATHENS Stock Exchange by the Norwegian ensemble Lemur. “Out of the Dark” is Lemur’s latest piece re-contextualizing major works from the contemporary and experimental music canon. Using their peculiar blend of improvisation and composition as a mirror, the Lemur ensemble transform titles and concepts into new and original works. The spaces of the once-mighty building on Sofokleous Street host an arrangement inspired by Pauline Oliveros’ score from 1998. Tectonics Festival audiences will be surrounded by both the musicians and a tailor-made sound system.

NATHALIE FORGET (FR): ONDES MARTENOT - “OUTREMER” (1969): BERNARD PARMEGIANI (FR)
Bernard Parmegiani (1927-2013) was one of the most important composers of electronic acousmatic music of the last 100 years. A member of the Groupe de Recherches Musicales (GRM), a collaborator of Iannis Xenakis, and a major musical influence on Aphex Twin, Autechre and Keith Fullerton Whitman, Parmegiani wrote everything from film music to the jingle heard before every announcement at Paris’ Charles de Gaulle airport for 35 years. The ondes Martenot soloist Nathalie Forget has worked with leading symphony orchestras, as well as with Radiohead and Faust. At the former Athens Stock Exchange, audiences will get the chance to hear this rare electronic music instrument created by Marice Martenot in 1928 played live, in a performance of the work “Outremer” (1969) for onde Martenot and magnetic tape.

TETSUYA UMEDA (JP)
At times, ordinary materials – such as ropes, cans and plastic bottles – present unexpected aspects of expansion and occurrence in the viewer, caused by the combination of the simple effects of natural phenomena such as gravity and centrifugal force; the artist does not manipulate them in any specific way. Every single ray of breathtaking light, every sudden accidental explosion, every odd sound can be attributed to, and seen simply to be engaging in parts of its everyday behavior. Thus the boundaries of what we are watching and listening to become blurred and our familiar surroundings, potential accidents and audience behavior become merged as part of the performance. This develops into the realization of a unique experience of the performance, where the ordinary and the extraordinary cross and coincide only in that moment and in that space.

MIK QUANTIUS (DE)
The solo appearances of the lead vocalist of the German krautrock group Embryo are completely unpredictable, and known from their disarming directness. Making use of highly simple means and a humorous outlook, Mik Quantius shifts between music and performance.

ZOMBIE PENGUIN & THE GLORY HOLES (GR)
From the Athenian underground scene to the Athens Stock Exchange. Zombie Penguin & the Glory Holes present an audiovisual performance prepared specially for this year’s Tectonics. The mutant penguin – an activist and employee of Antarctic Oik – makes its unexpected appearance at the former Athens Stock Exchange.

THE PRUDENCE TAPES (GR)
The Prudence Tapes duo bring the night to a close with a powerful DJ set.

ABOUT TECTONICS Athens 2019
With eight world premieres, legendary artists and improvising musicians on stage with the greek radio symphony orchestra, new site-specific works at the former athens stock exchange, imaginative makeshift devices and rare musical instruments, electronic music pioneers, dj sets and a show for children, the tectonics festival makes it clear that when it comes to music, anything is possible.

This festival is brought to Athens by the radical conductor Ilan Volkov, and aims to redefine the role of the Symphonic Orchestra in the 21st century while bringing together various ways of making music. Improvisation, contemporary composition, sound art, traditional music, electronic noise, and song all meet, collide, and complement one another in a three-day festival of tectonic pressures.

Devoted to discovering and revealing valuable works and composers of yesterday and today, Ilan Volkov proposes an interpretation of music that crosses genres, epochs, and geography. Maintaining a constant reference to avant-garde movements and trends of the previous century, such as Fluxus from the 1960s and ’70s, the indeterminacy and randomness of John Cage, site-specific works, electroacoustic composition and no wave music, the Athens version of Tectonics explores the meaning of “here and now” in live musical art.

-->Find the full programme of the festival HERE 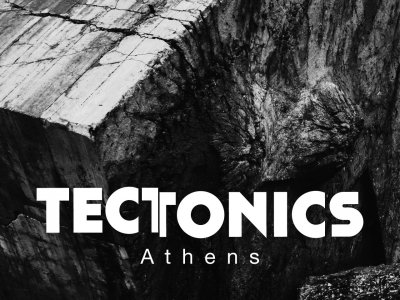